5 Woodstock Photographers on the Images That Moved Them Most : TIME Magazine 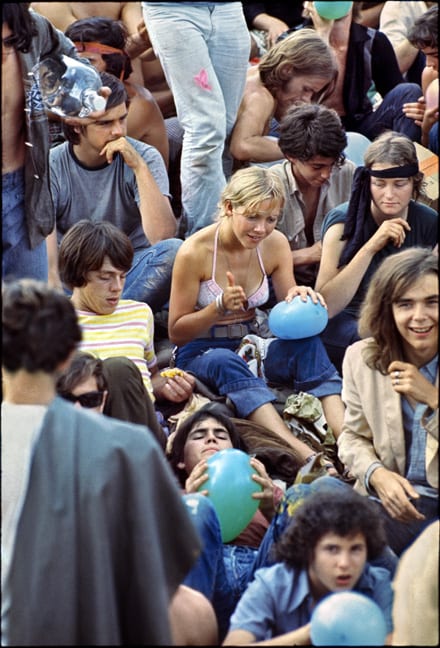 Woodstock is a spiritual place and has a very special feeling about it, which is why I had moved there in 1968 and lived there on and off since then, before returning permanently in 1990. It’s where I was casually introduced to producer Mike Lang, who knew the photography work I’d done with Bob Dylan and the Band during my time in New York City. He called me up one day and asked to stop by, before asking me if I wanted to photograph the concert he was planning. I said sure and he told me he’d call me when he was ready, which is how I became what I like to call the official photographer of Woodstock.

When I think back, the experience of being there was truly one of freedom. You were free to think the way you wanted to think, rather than the way you were brought up to think, and that was extraordinary.

You were freed from concerns, from responsibilities. And you were stuck there—there was no chance you were gonna go anywhere or do something else, or call about your job, or anything like that. You were isolated, surrounded by an energy field. I think of brains as bioelectric devices and if you’re sensitive, you can feel it.

With half a million people there and everybody’s brain on the same vibration, it felt pretty good—It felt pretty calm to be in that crowd. There was just this sense of ease where you felt everything was going to be okay, no matter the conditions. There was also a sense of security and you knew you wouldn’t be arrested for smoking grass, or for taking your clothes off. Law enforcement was going to leave you alone.

That’s what this picture shows; that genuine sense of ease. It’s a close-up of just one group in the crowd, and although there’s no room to walk—you can’t even see the ground—everyone is tightly knit in a wonderful way. Although they’re crowded, they’re all comfortable in their own space.

When I look closer, I see that the young woman at the center is attractive, but she’s not objectified or sexualized in this situation. She’s free to be feminine without concern for its impact on anyone else, or fearful of whatever impact they might have on her. She’s probably stoned, grooving to the music, while contemplating something, and she’s almost caressing this blue balloon. It feels very feminine to me but also very childlike, which is how I feel Woodstock was overall.

That may actually be one of the most important “teachings” of the ’60s culture—the value of being childlike, being curious about everything and trusting of everything. These people are embracing their inner child in a beautiful way and these balloons highlight that experience. I don’t know why they had these balloons or where they got them, but it doesn’t matter. Even the young man in the yellow striped shirt, who is staring at his broken yellow balloon, is showing us something. He’s not upset, he’s just aware that change is always going to happen. Sometimes it’s good and sometimes it’s bad, we just have to learn how to live with it in a positive way.